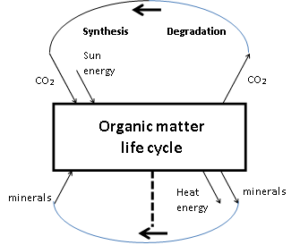 Any organic matter originates from carbon dioxide and water thanks to photosynthesis where chlorophyll and sun energy play a crucial role. After death the organic matter is degraded back to carbon dioxide and water. Minerals which were taken up from the soil during growing of vegetation are after degradation released back to the soil. In order not to impoverish the soil, all the minerals which had been taken from the soil should be returned there. Unfortunately, it’s not the case currently. A large part of organic matter lands up nowadays on landfills or on secondary areas where it causes a number of serious problems. One of them is the production of methane gas, which contributes to warming up even more than carbon dioxide. At the same time lots of artificial fertilizers are added to the soil in order to give necessary minerals to the growing vegetation. This causes serious long terms problems. One of them is that soil where only artificial fertilizers are added keeps humidity worse and is eroded much easier than the soil supplemented with organic matters. Another serious problem is that a significant part of artificial fertilizers lands up in water recipients (lakes, rivers, seas) causing overfertilization.

The degradation process, in most cases an aerobic process, consists of a few steps and takes from a few months to a few years. The length of the process depends on local parameters. If one or more parameters are not optimal the degradation will slow down and its time will increase. At the end of the process all the carbon dioxide returns to the air and all the minerals return to the soil. It means that the natural organic matter life cycle is “carbon dioxide neutral”.

SOFT – in short
The main goal of SOFT is:

The meaning is to keep the process parameters within the most effective ranges in order to achieve the product of high quality in shortest possible time.

Raw material – all the organic material can be treated according to SOFT e.g. rests and wastes in agriculture or from food industry, kitchen rests or expired food. Even some industrial wastes e.g. from palm oil industry can be treated in the process. Quality and usage of the fertilizer depends on the ingredients and the process parameters.

Right components and composition must be achieved in order to keep C/N-ratio (see below) within optimal limits. The process parameters and the necessary treatment are to be adjusted to the composition of the ingoing raw material. 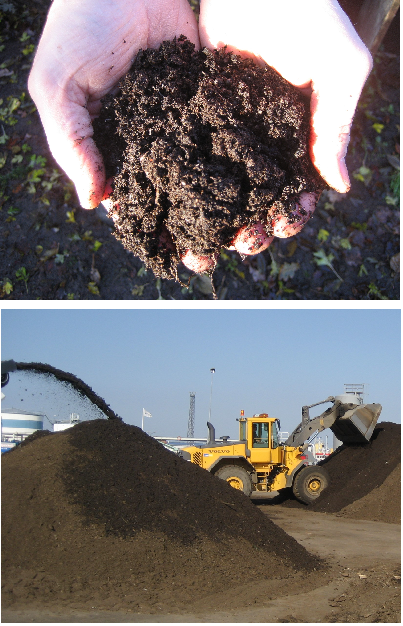 The product (often called compost) – a mixture of partly degraded organic matter (different degradation level for different species), which can be used as an organic fertilizer. The product is usually dark brown or close to black. The structure is slightly grainy. Looks like quite wet soil and smells usually as newly mixed garden soil. Usually, the fertilizer can be used in any gardening or farming.

Depending on the raw components and the applied process the quality of the fertilizer varies and each fertilizer is more or less suitable for certain type of vegetation. Even if a particular fertilizer does not contain the special components needed by the vegetation it is an advantage of using it; the soil structure will be improved, which enables a better air penetration and a better preservation of humidity.

Usage of the fertilizer with industrial components must be considered carefully. If the quality of a particular organic fertilizer is not suitable for usage in food production, the fertilizer may be used in gardening, park maintenance or designing of green areas on golf courses or along roads.

The product has many advantages, such as:

Description
SOFT is based on composting, i.e. a spontaneous degradation of organic matter in aerobic conditions. In the nature all the organic components are degraded sooner or later but SOFT makes the process more effective and keeps all the valuable components within the process.

The process is run by natural bacteria, fungi and other microbes. Sometimes even some insects and earthworms take active role in composting.

The compost has many advantages but two are the most important.

Five parameters are crucial for the process:

The SOFT process
The process can be designed in many ways depending on raw material components, wanted processing time, local conditions and economy.The SOFT process can be run in any scale, from individual gardens to very big plants treating several tons per day. The most common scheme is shown on the sketch to the right.
In bigger plants the process is run in windrows, channels or reactors. 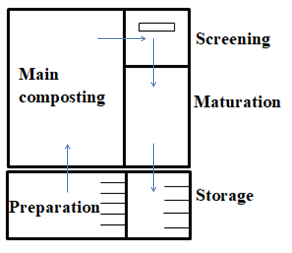 The process consists of following phases:

In order to achieve a special type of fertilizer it is possible to add some nutrients.

During the entire process humidity of the mixture is controlled and water is added, if necessary. At the same time the mixture is usually blended (mixed) in order to make the components evenly distributed in the whole composting body.

Blending is done by simple loaders or advanced mixers, in beginning more frequently and less frequently later on.

The SOFT process is always run on hard and impervious surface. It helps in easy treatment but the most important is possibility for collection of leakage water, if happens. The collected leakage water is used for watering of the mixture or is cleaned (usually by aeration).

Even some industrial residues, e.g. from palm oil industry or organic material spoiled with petroleum products, can be composted. The process and the parameters must be adjusted to the mixture. The achieved product cannot be used in agriculture, but it is much less harmful for the environment or hazardous for people than it was before the treatment. This kind of compost can be used on green areas.

The above is a general description of SOFT. Do you want to start the process and need advice? Get in touch with KONSEB for further explanations and technical support how SOFT can solve your problems and turn them into advantages.